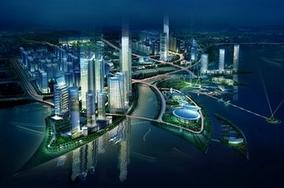 Located on the lower reaches of the Minjiang River in eastern Fujian, the city of Fuzhou is the capital and the political, economic, and cultural center of Fujian Province. It is also called "Banyan City" because banyan trees began to be planted in the city 900 years ago.

There are many places famous for their scenery or historical relics. It is one of the three hotspring regions in China and a hotspring city in the world. Fuzhou is also a major handicraft producer, putting out Shoushan stone carvings, bodiless lacquerware, and cork patchwork. "Tianhuang," a stone quarried in Shoushan, is treasured as a high-quality stone.

The Fujian cuisine, with that of Fuzhou as its representative, is one of China@,@s eight major cooking styles and has a unique local flavor.

Main Hall of the Hualin Temple

It is outside the compound of the Fujian provincial government, at the southern foot of Pingshan Hill in northern Fuzhou Originally, there were stones bearing inscriptions in the imperial handwriting, the Mahavira Hall Huanfeng Pavilion, Juexue Hut, and Shenghui Pavilion. Only the main hall is extant. Regions south of the Changjiang (Yangtze) River are rainy and humid, hard for old wooden buildings to survive. The Main Hall at the temple is one of the ancient wooden structures existing south of the Changjiang River.

Formerly called Tree Park, it is one of the nine principal parks in China serving both scientific research and tourism. The park in Chiqiao Village on the northern outskirts of Fuzhou consists of a forest zone, a tree nursery, a greenhouse, a special tree specimen park, and a rest area.

The stream, a tributary on the lower reaches of the Dazhang River, rises from the eastern foot of Guya Hill in Nantong Township of Minhou County, 20 kilometers from Fuzhou and flows a drainage area of 62 square kilometers. It gathers on its way 24 tributaries, each with a horizontal length of 500-odd meters.

It towers in the eastern suburbs, eight kilometers from Fuzhou proper. The mountain is so named because a huge rock on the summit resembles a drum and gives oft the sound similar to that of a beaten drum when wind blows or rain falls. South of the summit stands the Yongquan Temple on a piece of flatland about 450 meters above sea level. The 1,000-year-old temple represents the cream of China@,@s ancient architecture. There are also many inscriptions on precipices.

Facing Wufeng Mountain, the tomb is at the foot of Jinshi Mountain in Ma@,@an Village on the outskirts of Fuzhou. Built in 1826 by Lin Zexu for his parents, the graveyard now has six tombs, including tombs of Lin.Zexu, his wife, his brother, and sister-inlaw. The Fujian provincial government carried out renovations to the graveyard in 1962 and in 1982, adding a protection slope in front and planting pines and bamboo at the back.

Also known as East Mist because of the island is often enveloped in mist from the east, Pingtan Island is the largest in Fujian and the fifth largest of its category in China. The zigzag coastline around it features more than 100 kilometers of quality beaches where fine sand is washed back and forth in the azure sea water.